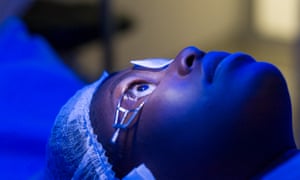 Lasers should become the principal method in the UK for treating patients with the debilitating eye condition glaucoma. That is the stark conclusion of a three-year study published on Sunday.

The report, which appears in the Lancet, says the laser technique – known as selective laser trabeculoplasty or SLT – should replace the prescribing of eye drops, the current favoured way to treat glaucoma. The study has revealed that SLT is not only more effective and safer but should also save the NHS £1.5m a year in tackling the condition.

“Simple, safe, pain-free laser treatments not only work better than eye drops but they cost the NHS less,” said one of the report’s authors, Gus Gazzard, who is based at Moorfields Eye Hospital in London.

“Using a laser for a one-off treatment also relieves patients from the tyranny of daily drops, which they have to take for the rest of their lives, and which can also produce side-effects.”

Side-effects associated with the drops include increased risks of developing eye cataracts in later life, as well as a reduced pulse rate and fatigue.

Glaucoma is one of the world’s leading causes of blindness. In the UK, it affects about 2% of the population over the age of 40 and is most often triggered when tubes in the eye become blocked, preventing fluid from draining from the eye properly. Pressure builds inside the eye and this can damage the optic nerve that leads to the brain. Untreated glaucoma can lead to blindness.

Most patients with the disease in the UK are given eye drops. These help fluid to drain away more effectively from the eye. They also decrease the amount of liquid made within the eye. However, the eye drops have to be taken every day. By contrast, SLT is a relatively new one-off treatment that can be performed in a hospital out-patient clinic in about 15 minutes.

The patient sits in front of a microscope-like device and looks into it. About 100 tiny laser pulses are flashed into the eyes. These trigger slight inflammation at the points where liquid leaves the eye, and so disrupts the blockages there. As liquid levels lower, the pressure within the eye decreases and the glaucoma improves.

The questions facing ophthalmologists were straightforward: which technique is better for the patient? And is there a difference in the value each offers to the health service? To find out, researchers set up a three-year trial involving 718 patients who had been newly diagnosed with the condition. Then they compared the effectiveness of the treatments they received.

Results – published to coincide with World Glaucoma Day on Sunday – demonstrate clearly that patients who received SLT had better and more stable eye pressures. There was also less need for glaucoma surgery and cataract extractions.

Apart from its impact in Britain, the use of a one-off treatment like SLT also has important implications for nations that lack sophisticated health services. There is no need for follow-up treatments or lifetime prescriptions of drugs since all that is administered in a single appointment.

“This is a landmark study,” said Thomas Brunner, president of the Glaucoma Research Foundation. “In developing countries, SLT could be a major step to prevent blindness from glaucoma.”

For more details about SLT and Glaucoma please visit here